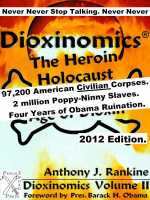 Dioxinomics: The Heroin Holocaust in the Age of Dioxin

The Second Volume in the Dioxinomics Series.

Barack H. Obama: “Under my charge as Commander-in-Chief, our troops in Afghanistan will ensure that never again will death be exported from that region into the American homeland.”

There is historical fact and there is hyperbole.

Over 2 million poppy-ninny slaves in Afghanistan work on 508,000 acres of opium plantations bringing in an annual harvest of over 4,500 tonnes of toxic death which puts 2,000 American civilians per month into an early grave.

From out of Afghanistan, death is exported into America.

The first part of the book details the who behind the devastation of Dioxinomic warfare, and it is not just today’s enemy of convenience: radical Muslims. Because devastation is scientifically unavoidable, the remaining parts focus on the new Dioxinomic order that will supplant normal economics across the planet, and how you can save yourself from Dioxinomic ruination.

If you only read one book before the 2012 election, make it this one.

There is history and there is hyperbole.